The proportion of patients given antibiotics by GPs for coughs and colds rose by 40 per cent between 1999 and 2011, a study has found.

Antibiotics do not work against viruses, which are often the cause of colds and sore throats.

But researchers from Public Health England and University College London discovered that the proportion of patients prescribed antibiotics by their GP for coughs and colds reached a new high of 51 per cent in 2011 – up from 36 per cent in 1999.

And despite dire warnings about the dangers of antibiotic resistance caused by overuse, they suggested that GPs tend to prescribe them when they are put under pressure by worried patients.

According to the study, which was published in the Journal of Antimicrobial Chemotherapy, the 10 per cent of GP practices with the highest prescribing rates gave antibiotics to two-thirds of patients with the minor illnesses.

And use of the recommended antibiotic trimethoprim in women for cystitis increased from 8 per cent in 1995 to 50 per cent in 2011.

Last year 41.6million prescriptions were dispensed for antibiotics in England, according to figures from the Health and Social Care Information Centre, which do not show how many were handed out for coughs and colds.

The Government’s chief medical officer Dame Sally Davies said last month that pushy patients have been partly to blame for the rise of deadly superbugs which are immune to the drugs.

And the Prime Minister has warned that Britain faces returning to the ‘dark ages of medicine’ where antibiotics no longer work.

Lead researcher Professor Jeremy Hawker, a consultant epidemiologist from Public Health England, said: ‘Although it would be inappropriate to say that all cases of coughs and colds or sore throats did not need antibiotics, our study strongly suggests that there is a need to make improvements in antibiotic prescribing. 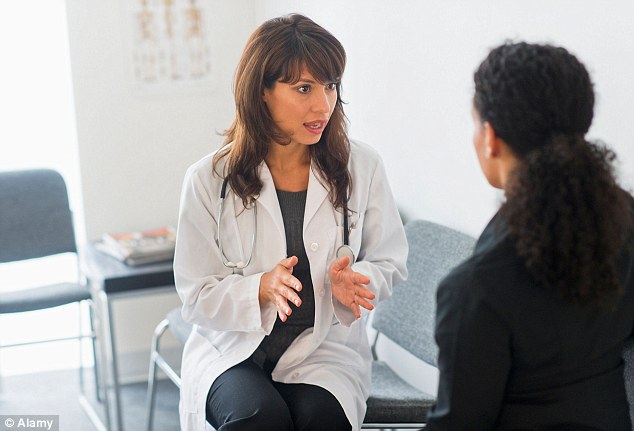 Gets rid of them: It was suggested some doctors prescribe useless antibiotics to stop patients returning

‘Previous research has shown that only 10 per cent of sore throats and 20 per cent of acute sinusitis benefit from antibiotic treatment, but the prescription rates we found were much higher than this.’

He added: ‘The worry is that patients who receive antibiotics when they are not needed run the risk of carrying antibiotic-resistant bacteria in their gut.

‘If these bacteria go on to cause an infection, antibiotics will then not work when the patient really does need them.’

Professor Hawker went on to say that ‘defensive medicine’ could be partly responsible for some GPs prescribing them more often for coughs and colds to save them ‘being caught out’ by complications if the condition got worse.

And he suggested that GPs keen to cut down on their workload may give patients a prescription to stop them coming back to the surgery.

Dr Maureen Baker, chairman of the Royal College of General Practitioners, said: ‘Antibiotics are very effective drugs, as long as they are used appropriately. But we’ve developed a worrying reliance on them.

‘GPs face enormous pressure to prescribe them, even for minor symptoms which will get better on their own or can be treated effectively with other forms of medication.’

She added: ‘Our patients and the public need to be aware of the risks associated with inappropriate use of antibiotics – and know how to use them responsibly.

‘This study reinforces the message that we issued recently for frontline health professionals to resist pressure from patients for unnecessary prescriptions and explore alternatives to them.’