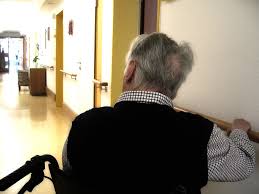 A GROWING number of people in need of social care could be left stranded in hospitals because of “continued underfunding”, council leaders have warned.

Meanwhile, the number of people who had “unmet basic needs”, such as getting washed, dressed or getting out of bed, could also rise, the Local Government Association (LGA) said.
Those who got care could face shorter visits from strained carers, the LGA added.The comments came as the LGA, which represents 370 councils across England and Wales, warned that the Government’s Care Act was doomed to fail unless more money was allocated to the social care sector.
In a statement, the LGA said that “continued underfunding of social care is making it impossible for local authorities to fulfil their legal duties under the Care Act”.
This could leave the system “on the brink of failing altogether and councils facing the prospect of court challenges”, the LGA added.In its submission to the Treasury ahead of the Budget, the LGA said that if new money was not ploughed into the social care sector then ministers needed to be “honest and upfront” with the public about the level of care that could be provided.A poll conducted by the Association of Directors of Adult Social Services found that just 8 per cent of directors of adult social care in councils were confident they could meet the full duties of the Care Act in the coming financial year.
Izzi Seccombe, the chairman of the LGA’s Community Wellbeing Board, said: “The Care Act is a really important piece of legislation which the LGA fully supports.”But the intentions and the spirit of the Care Act that aims to help people to live well and independently, are in grave danger of falling apart and failing, unless new funding is announced by government for adult social care.”It is not good enough just to be trying to help someone get washed and dressed, adult social care is about much more than this.”It is about aspiring to help people live their lives to the fullest, and with dignity, not simply just get by. This is the great strength of the Care Act, which unfortunately is now at risk.
“If no new money is urgently announced, then government needs to be honest and upfront with the public about the limitations of the care and support we can provide, and the fact that as a society we will no longer be able to meet the ambitions and objectives of the Care Act.”Janet Morrison, the chief executive of the charity Independent Age, said: “The social care system is chronically underfunded, and this continues to undermine implementation of the Care Act.”The impact of this failure falls on older and disabled people, who can be left without any assistance to carry out day-to-day tasks such as washing or going to the toilet.”Last year, we saw record numbers of people stuck in hospital when they were well enough to leave, because of a failure to put an appropriate care package in place.
“With councils seemingly failing to meet their requirements under the Care Act, the Government needs to find a long-term solution on social care funding that all parties can support.”A Government spokesman said: “Local Authorities have a duty to implement new rights introduced in the Care Act and, while many are already providing high-quality social care services, we will continue to challenge and support those not currently doing so.”We have provided councils with up to £7.6 billion of dedicated funding for social care over the course of this parliament – significant investment to ensure that vulnerable people get affordable and dignified care as our population ages.”Matthew Swindells, NHS England’s national director for operations, said: “This month’s figures show a 42 per cent annual increase in delays in being able to discharge patients as a result of pressures in social care.”Hospitals report this affects their ability to quickly admit emergency A&E patients, so the NHS is working closely with local councils and community health services to enable older patients to get the support they need after a hospital stay, back at home.”Source The Express