It is such an important goal for all care homes and care facilities to ensure they enhance and, where possible, improve the quality of life for the residents with dementia. The Kingsfund assessment tool enables Care Homes to do this. It contains seven different sections looking at different aspects of the physical environment and a set of questions for each section. It encourages everyone to become involved in assessing how dementia friendly their care facility is.

This tool was brought to my attention by an independent sector development officer. He talked of the merits of taking a good hard look at your Care Home from the perspective of the person with dementia and he recommended this tool.

It is a real beneficial and practical help to the manager and staff, because it helps to evidence improvements and developments in a Care Home or care service.

We changed many things as a result of using the assessment tool. Some  changes were very small, but overall these changes improved the level of how dementia friendly our Care Home was, and is today.

Each section prompted analysis and improvement. Simple things such as looking how inviting the entrance was, how obvious was the location of the doorbell, and how easy was it to use. This of course not only helps residents with dementia, but also those with diminished sight. The tool re-enforced the importance of group seating to encourage conversation and interaction between residents.

The names plates on bedroom doors were doubled in size to make them more obvious to the resident. We created new signage for the public areas of the Care Home, again making it far more noticeable than previously, but this also included a lot more additional signage to help direct residents around the Care Home.

The garden area was developed to add raised flower beds to give residents the opportunity to enjoy gardening without bending if they did not want to do that. Garden areas were also secured to give residents complete freedom to be outdoors whilst at the same time ensuring their security.

The residents, relatives, staff, management, and other healthcare professionals were involved in the assessment and the residents were consulted and involved in the decision making process. Everyone has learned from and enjoyed the whole experience.

The changes which can be made are in many cases, small and inexpensive, and relatively easy to make. Collectively they help the residents to maintain their independence and enhance their quality of life.

Footage from a camera installed by the family of Gladys Wright, 79, showed her being pushed, shoved and pulled by staff at The Granary Care Home near Wraxhall, north Somerset.

Three staff members can be heard calling the helpless pensioner a ‘nasty aggressive b**ch’ and telling each other to ‘f*** her’, throughout the recordings. 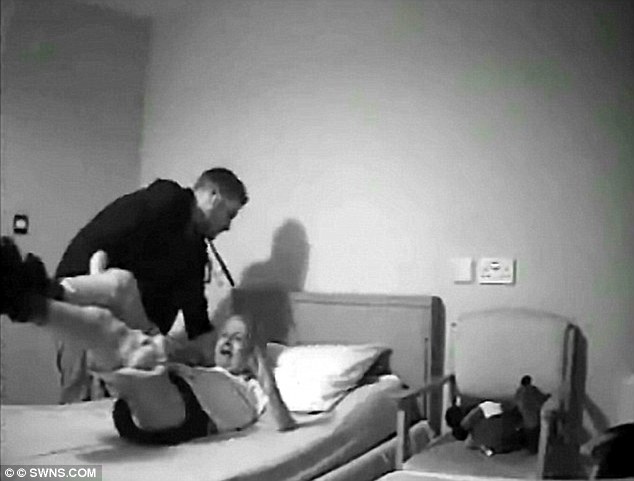 Footage from a camera installed by the family of Gladys Wright, 79, showed her being pushed, shoved and pulled by staff at The Granary Care Home near Wraxhall, north Somerset

The appalling treatment only came to light after Mrs Wright’s son, James, placed a hidden camera in the room.

He set the device up to reassure himself the treatment his mother was receiving in the specialist home was unlike the horror stories he had read about, but he was so disturbed by what he saw he immediately took the footage to police.

The men, who were suspended from their positions as soon as the evidence came to light, pleaded guilty to the abuse, which took place in October and December 2012.

Three care workers were later prosecuted for the abuse, which was caught on a camera installed by Mrs Wright’s concerned son James.

But now the company which runs The Granary Care Home near Wraxall, north Somerset, has introduced a policy banning covert cameras.

Relatives have been told that any devices found during inspections of rooms will be removed and the footage retained.

Shaw Healthcare says the ban is down to ‘legal issues around filming people without their consent’.

Liam Scanlon, head of safeguarding and compliance at Shaw Healthcare, said: ‘Shaw healthcare condones the use of cameras so long as they are installed in a way that complies with the Mental Capacity Act and is in the best interest of the service user.

‘Given the legal issues around filming people without their consent and the ability of those who may not have the mental capacity to give proper permission for this to take place, we ask relatives and residents to discuss the placement of cameras with us before they do it.

But families say the policy ‘negates the whole purpose’ of hidden cameras, which bring them peace of mind.

Retired solicitor Tim Sykes, whose 87-year-old mother and 60-year-old sister are at The Granary, has vowed mount a legal challenge to the ban.

Mr Sykes, 58, said: ‘By informing Shaw that cameras are in the room it negates the whole purpose of them.

‘If cameras were not in the room at the time the elderly lady was being abused it is possible those three men may never have been caught and they could still be abusing residents to this very day.

‘I, and many other relatives, do not accept this new ruling.

‘I will be writing to Shaw to tell them this and also warning them that I will be bringing civil and criminal proceedings if they interfere with our actions in the best interest of our family members.

‘My mother is paying more than £800 a week to live at The Granary. Her room there is what is left of her home and is her only bit of privacy and a space she can continue to command.

‘She should be allowed to do what she wishes in this personal setting.

‘Using cameras gives relatives peace of mind their relatives are being cared for as they should be.’

Hidden camera footage was crucial in the prosecution of three carers at Bristol Crown Court in June last year.

Video emerged in which Daniel Baynes, Tomasz Gidaszewski and Janusz Salnikow, can be heard calling Mrs Wright a ‘nasty aggressive b**ch’ and telling each other to ‘f*** her’.

Baynes, of Bath, was handed four months behind bars after admitting three counts of ill treatment or neglect of a person who lacks capacity, and another of theft after he was caught stealing Mrs Wright’s food. 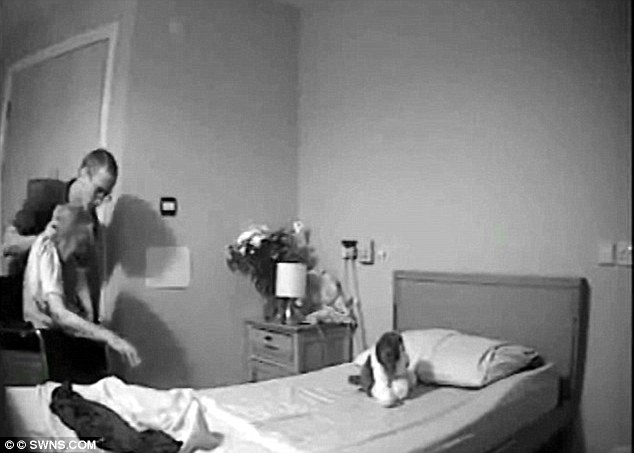 Salnikow, of Southmead, Bristol, who practised yoga while in the dock, was given two months in prison, suspended for two years after admitting three counts of ill-treatment.

Gidaszewski, of Nailsea, north Somerset, was sentenced to 180 hours of unpaid work for admitting one count of the same.