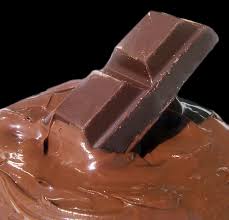 Some of the UK’s favourite chocolate bars – including Kit Kats and Yorkies – will contain 10% less sugar by 2018, Nestle has announced.

The confectioner said it would use around 7,500 tonnes less sugar to make its products by next year.

The sugar will be replaced with higher quantities of other existing ingredients or other, non-artificial ingredients

Nestle has said it will use 10% less sugar in its chocolate bars, which include Kit Kats, by 2018

Products will also be kept below a certain amount of calories.

Fiona Kendrick, Chairman and CEO of Nestle UK and Ireland, said: “Our confectionery brands have been enjoyed in the UK for more than a century and we know that if we can improve these products nutritionally, provide more choice and information for the consumer, together with other categories, we can have a significant impact on public health.

“Nestle is at the forefront of efforts to research and develop new technology that makes food products better for our consumers.

“These innovations will help us to reduce sugar in confectionery when they are combined with other, more common methods like reformulating recipes and swapping sugar for other, non-artificial ingredients.

“Making these improvements to our products is key to us delivering better choices for our consumers while retaining the same great taste that they know and love.”

Sourced by the Mail Online

For those of us who love nibbling on chocolate but feel guilty afterwards, this could be the news we’ve been waiting for.

Scientists claim they have developed a type that is so healthy it could be taken as medicine.

The key ingredient in chocolate, cacao, contains antioxidants and minerals, and can even help lower blood pressure while increasing ‘good’ cholesterol.

But these health benefits are outweighed by the fact most chocolate bars are at least 70 per cent fat and sugar.

Now, an American company has developed a prototype that is only 35 per cent sugar and fat, by sweetening the unpalatable pure cacao with a herb from the Andean region of Bolivia and Peru.

Gregory Aharonian of Kuka Xoco, which is developing the chocolate, said: ‘Using micrograms of coca plant extract, we can de-bitter unsweetened cacao.

‘This eliminates the need for sugar, sweeteners and much of the fat in chocolate, unleashing the medical benefits of cacao.’

He added that their long-term goal was to develop chocolate that was just ten per cent fat and sugar.

The firm, which is based in Boston in the US and in Bolivia, argues that artificial sweeteners have failed because they taste bad, lead to weight gain and have adverse health effects. Its product is due to go on sale next year.

Speaking at the World Chocolate Forum in London this week, Mr Aharonian described sugar as ‘the next nicotine’ and argued that if the unhealthy ingredients were removed from chocolate, it could and should be eaten medicinally.

He said: ‘In America, the $100billion-a-year chocolate industry could become a $200billion-a-year health food industry, if only much of the sugar and fat could be removed.

We look forward to working with the chocolate industry to make chocolate the most fun medicine.’

It sounds like the ingredient list for an indulgent dessert. But red wine, chocolate and strawberries are more than a guilty pleasure. They could all help guard against diabetes.

A study found for the first time the high content of flavonoids found in berry fruits may regulate blood glucose levels, and stave off type 2 diabetes.

Flavonoids are antioxidant compounds found in plants, as well as tea, red wine and chocolate, which can protect against a wide range of diseases, including heart disease, hypertension, some cancers and dementia.

The study found the main protective effect came from higher intakes of anthocyanins, which are present in strawberries, blackcurrants, blackberries and blueberries.

They also lowered inflammation which, when chronic, can lead to disease, says the study published today in the Journal of Nutrition.

Prof Aedin Cassidy from UEA’s Norwich Medical School, who led the research, said ‘We focused on flavones, which are found in herbs and vegetables such as parsley, thyme, and celery, and anthocyanins, found in berries, red grapes, wine and other red or blue-coloured fruits and vegetables.

‘This is one of the first large-scale human studies to look at how these powerful bioactive compounds might reduce the risk of diabetes.

‘Laboratory studies have shown these types of foods might modulate blood glucose regulation – affecting the risk of type 2 diabetes.

‘But until now little has been know about how habitual intakes might affect insulin resistance, blood glucose regulation and inflammation in humans.’ 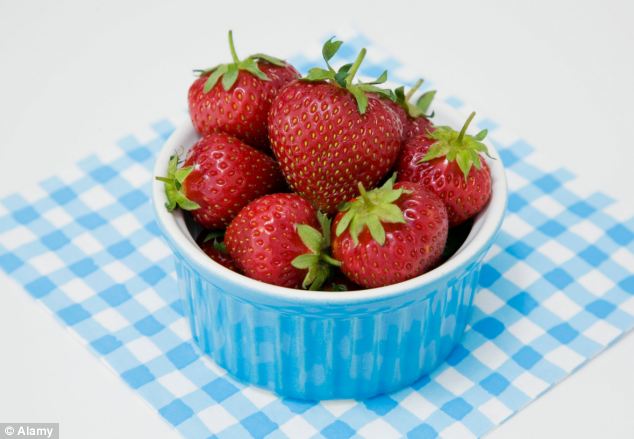 Blood samples were analysed for glucose regulation and inflammation, while insulin resistance, a hallmark of type 2 diabetes, was also assessed.

Prof Cassidy said ‘We found that those who consumed plenty of anthocyanins and flavones had lower insulin resistance.

‘High insulin resistance is associated with type 2 diabetes, so what we are seeing is that people who eat foods rich in these two compounds – such as berries, herbs, red grapes, wine- are less likely to develop the disease.

‘We also found that those who ate the most anthocyanins were least likely to suffer chronic inflammation – which is associated with many of today’s most pressing health concerns including diabetes, obesity, cardiovascular disease, and cancer.

‘And those who consumed the most flavone compounds had improved levels of a protein (adiponectin) which helps regulate a number of metabolic processes including glucose levels. 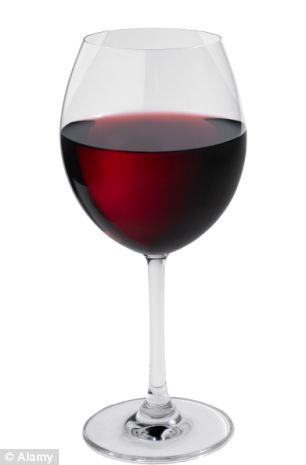 ‘What we don’t yet know is exactly how much of these compounds are necessary to potentially reduce the risk of type 2 diabetes’ she added.

Prof Tim Spector, research collaborator and director of the TwinsUK study from King’s College London, said ‘This is an exciting finding that shows that some components of foods that we consider unhealthy like chocolate or wine may contain some beneficial substances.

‘If we can start to identify and separate these substances we can potentially improve healthy eating.

‘There are many reasons including genetics why people prefer certain foods so we should be cautious until we test them properly in randomised trials and in people developing early diabetes.’ Dr Alasdair Rankin, director of research for Diabetes UK charity, said the findings should be treated with caution.

He said ‘There have been contradictory findings from other studies and, also, even if high flavonoid consumption and lower Type 2 diabetes risk do tend to happen together, it does not necessarily mean that one is causing the other.

‘So while interesting, this study is not the smoking gun that would finally persuade us that flavonoids really do help prevent Type 2 diabetes.

‘From the point of view of what people should do to reduce their risk of type 2 Diabetes, we already recommend a healthy lifestyle that involves doing regular physical activity as well as eating a healthy diet to help maintain a healthy weight.

‘This includes eating plenty of fruit and vegetables, some of which, such as berries, apples and pears, are rich in flavonoids.

‘But for red wine and chocolate, which also contain them, our advice is to limit your consumption of these and this advice would be very unlikely to change even if further research did demonstrate that flavonoids reduce type 2 diabetes risk.

‘This is because any health benefit from the flavonoids would be dramatically outweighed by the calories in the chocolate and the alcohol in the wine.’

Indulging in chocolate and other sweet treats such as biscuits and cakes could increase your risk of bowel cancer, researchers say.

It is the first study to link fatty and sugary snacks to bowel tumours, which claim more lives than any other form of the disease apart from lung cancer.

However, not all treats are off the menu. The British study also found drinking lots of coffee could have a protective effect.

Previous research has blamed processed meat, for example bacon and sausages, for raising the odds of bowel cancer. But the latest study suggests other popular foods fuel the disease as well.

Edinburgh and Aberdeen University researchers asked more than 2,000 men and women with bowel cancer to fill in a lengthy questionnaire about what their diets were like before diagnosis.

Another group of around 3,000 volunteers of a similar age and from similar areas also answered the questions, which covered more than 170 different foods.

Those who ate the most ‘high-energy snack foods’, such as desserts, chocolates, biscuits, cakes, sweets, nuts and crisps, were 18 per cent more likely to have developed bowel cancer than those who ate the least.

The finding held true even when obesity and lack of exercise – two factors already known to raise the risk of bowel cancer – were taken into account.

High quantities of fizzy drinks raised the odds of getting the disease by 12 per cent.

The study, published in the  European Journal of Cancer  Prevention, also linked white fish with the disease. Researchers said this was unexpected but thought it  may be because most of the  fish eaten by participants was cooked unhealthily.

Coffee, however, seemed to help. Those who drank lots of it had an 8 per cent lower risk of developing bowel cancer than those who did not. A previous study credited four cups a day with lowering the risk by a quarter.

However, other research has failed to find any benefit. Any benefits could be due to plant compounds in coffee. It may also provide protection by keeping the bowels active.

Edinburgh University researcher Dr Evropi Theodoratou said her study stops short of proving that sugary and fatty snacks cause the disease and other, bigger studies are needed.

She added that while it is unclear  how these foods cause bowel cancer, her findings shouldn’t be dismissed. ‘It is important to take on board what we’ve found – especially because people in industrialised countries are consuming more  of these foods,’ she said.

Jessica Harris, of Cancer Research UK, which part-funded the research, said: ‘While this study on its own can’t show for sure that these foods are linked to cancer risk, it’s still a good idea to limit the amount of high-sugar and high-calorie foods and drinks in your diet.

‘Having too much of these types of foods can lead you to put on weight, which we know is linked to higher risks of bowel cancer.

‘The best ways to reduce the risk of bowel cancer are to cut down on alcohol, get active, eat a balanced diet and aim to keep a healthy weight.’

Mike Lean, professor of nutrition at Glasgow University, cautioned that the figures could have been skewed by the cancer patients placing more emphasis on foods they believed to be bad for them.

He added: ‘We can’t yet start saying that this science shows that these foods cause bowel cancer.

‘But we are fairly sure that eating more fruit and vegetables and taking more exercise can prevent cancer.’