Bureaucracy is the bane of modern living. It sometimes seems that form-filling and box-ticking has taken on a life of its own – and, of course, this has infiltrated the world of medicine.

The working hours of doctors and nurses are now dominated not by patients, but by pieces of paper.

Clinical staff interviewed for a Government review published last week said they spent up to 10 hours a week collecting or checking data, and that more than one third of the work was neither useful nor relevant to patient care.

The review from the NHS Confederation, which represents health service managers, blamed duplication and poor use of technology for staff wasting their time in this way.

Many will be shocked that so much time is spent on paperwork, rather than caring for the sick, but I’m amazed that it is apparently so little.

I frequently feel I am drowning in forms to be completed, statistics to be gathered and boxes to be ticked. I trained to be a doctor because I wanted to work with people, not complete forms that have no tangible, meaningful impact on the patient.

Every clinician I know feels the same.

I work in a hospital providing tertiary care to people with severe, complex mental health problems.

I will typically see patients for 30 minutes to an hour.

For every patient I see, I have at least one hour of paperwork to do.

Some of this has a clear benefit to the patient. I spend a long time, for example, writing detailed letters to GPs providing in-depth history and patient treatment plans.

But these letters are only a small part of it.

A manager once pulled me aside and explained that if I didn’t complete certain forms, the service wouldn’t get paid.

I have to “cluster” patients into diagnostic categories each time I see them to record any improvements, and fill out numerous repetitious forms about this.

That way, the hospital can demonstrate to GPs that their patients are getting better.

I also have to complete risk assessments, forms relating to confidentiality and information sharing, and consent to treatment.

In addition, everything related to the patient must now be documented formally on a computer database.

If something goes wrong, then legally I am exposed unless I have documented it.

Why has this situation developed?

If I think it’s bad for doctors, it’s even worse for nurses.

How have we got to the state where, according to the Royal College of Nursing, the amount of time nurses spend away from patients on non-essential paperwork has doubled, with 2.5 million hours lost a week?

Two things are underpinning this.

The first is that our increasingly litigious culture has resulted in defensive documentation.

After someone’s mobile phone was stolen from a ward I worked on, three separate forms were introduced for the nurses to complete, to ensure that the trust was not held responsible for personal items of high value.

Secondly, politicians must take some of the blame for the tsunami of paperwork.

The introduction of the market into the NHS has resulted in trusts having to provide extensive documentary evidence for all work undertaken, resulting in a cataclysmic proliferation of forms as funding bodies demand statistics.

Again, this has no demonstrable impact on patients’ welfare. In fact, it risks having the opposite effect – in the NHS Confederation report, they found managers were spending more time writing plans to improve services than actually making improvements.

There are no signs of this abating. The NHS reforms introduced in April this year promised to reduce bureaucracy, but, in reality, they have increased it with more competition and commissioning being introduced – requiring even more data.

Doctor and nurses would love to do more of what they’re trained for, but at the moment, our hands are tied up with red tape.

Ministers have announced that minimum “safe” levels of staffing for wards will be calculated and made public, via a new website.

The plans were drawn up in light of the Mid Staffs scandal.

Now, as you sit on your hospital bed, cold, thirsty and in pain, you can check online to see that, yes, there aren’t enough nurses on duty that day. Big deal!

Politicians had an ideal opportunity to introduce legislation that would mandate trusts to provide adequate staffing levels, and instead they created – what? A website.

Until there is the threat of some punitive action being taken when staffing levels are not adequate, there is no incentive for trusts to ensure that this will always be achieved.

It is already widely accepted that the minimum staffing level for nurses on a ward is one nurse to eight patients.

What we needed was clear patient-to-nurse ratios brought in, and clear rules about the number of qualified versus unqualified or auxiliary staff to be used. What we got was a PR exercise that will achieve nothing.

All credit to Emma Thompson, who is tackling head-on the issue of children being exposed to graphic sexual content on mobile phones.

The actress decided to write her 13-year-old daughter a handbook on sex and relationships in an attempt to ensure that she was educated and empowered in this area.

But that was 20 years ago, and in a more innocent age. Now, children are exposed to a bewildering range of acts and proclivities that would be unimaginable to those who grew up just a decade ago. The only way to combat this is to do as Thompson has done.

After all, the only thing that’s worse than educating your children about sex is allowing the internet to do it.

Emma Thompson and her mother Phyllida Law yesterday called for a ‘care nurse in every street’ to help monitor dementia sufferers.

The actresses were speaking at the Cheltenham  Literature Festival where Miss Thompson, 54, said she had watched Miss Law, 81, go ‘slowly bonkers’ caring for her mother-in-law. 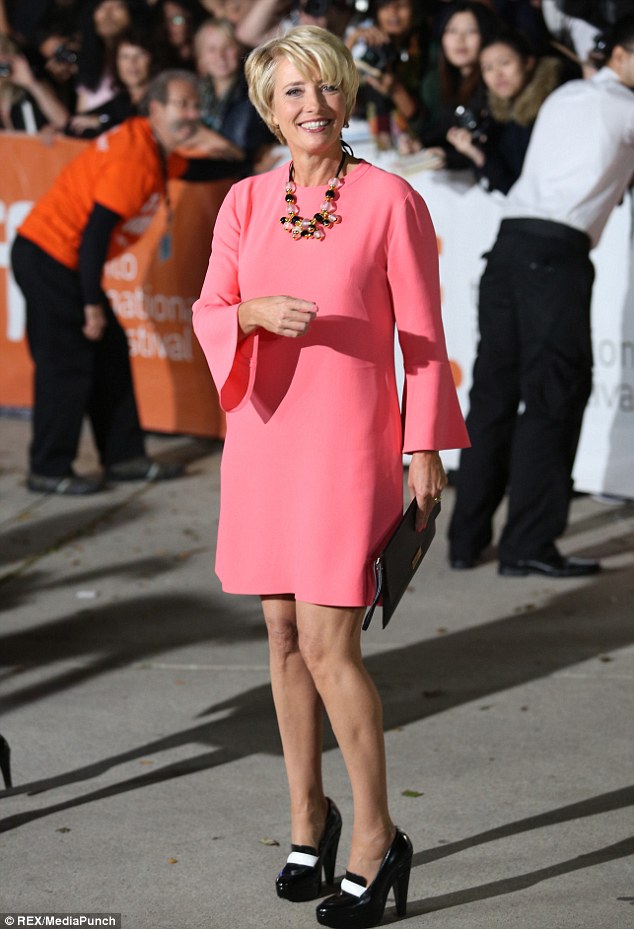 She added that she now had ‘an over-developed sense of responsibility’, having seen her mother look after Miss Thompson’s paternal grandmother for 17 years.

Miss Law said: ‘We need a care nurse for every street. What we need is somebody to come in and have a cup of tea and talk to us. It is not medical.’

Miss Law said there were times she was ‘scared’ that she had done the wrong thing while looking after her mother-in-law and said help would have been useful. She also helped care for her own mother who also had dementia.

Miss Thompson said that when her acting career took off, she had helped pay for care for her paternal grandmother, who had been living in the family home, to give her mother a break.

But she said much more help was needed for people who cared for loved ones.

Miss Law’s latest book – How Many Camels Are There In Holland? Dementia, Ma and Me – tells of her efforts to care for her mother.

Yesterday she told a festival forum that she had not actually discussed with her children what she would want if she developed the condition.

Miss Thompson said: ‘Mum sort of assumes that we kind of know what to do but it is actually a very good point – we haven’t discussed it.’

She revealed that she lives next door to Mrs Law and calls her round for dinner every night.

‘It’s all right when your daughter lives over the road,’ she joked.

Miss Thompson, who was promoting her new book The Christmas Tale of Peter Rabbit, said she found writing ‘hugely therapeutic’.

Last week Miss Thompson, who has been married to actor Greg Wise, 47, for ten years, said she thought monogamy was ‘an odd state for women’.

In a webchat with MumsNet, she said: ‘I think that we’re locked into certain ideas and certain romantic ideals that have shaped our thinking about relationships for some time.

‘And I do sometimes wonder about whether there are alternatives, and about whether our fury and rage and disbelief and horror about infidelity is quite realistic.’

Yesterday, Miss Thompson explained that monogamy was ‘something I practise’ but that she was questioning the idea that it was ‘the only way’.