Dementia researchers have developed a video game that could lead to the development of early diagnostic tests for the disease.

The way players navigate the 3D levels in Sea Hero Quest will be anonymously tracked and sent to the researchers.

Understanding how people navigate 3D environments is important because the skill is often one of the first lost by people who have dementia.

Researchers say the game could generate an unprecedented amount of data.

“We have never seen anything undertaken in dementia research at this scale before,” said Hilary Evans, chief executive at Alzheimer’s Research UK, one of the organisations involved.

“Providing the research community with access to an open-source data set of this nature, at this scale, in such a short period of time is exactly the kind of innovation required to unlock the next breakthrough in dementia research.

The free game was developed by the charity, researchers from University College London and the University of East Anglia, with the backing of communications giant Deutsche Telekom.

Players follow a sailor’s quest to revisit some of his father’s memories, and battle fantastical sea creatures.

The routes they take will generate global “heat maps” that will show researchers how people generally explore 3D environments.

The ultimate goal is to develop new diagnostic tests that can detect when somebody’s spatial navigation skills are failing.

“In my research team, I could only test about 200 people a year, and that’s working hard,” Dr Hugo Spiers, from UCL, told the BBC.

“But last night I tested 200 people in one minute with this game.”

Players can opt to reveal their gender, age and location to the researchers, although they can choose to take part completely anonymously.

“This project provides an unprecedented chance to study how many thousands of people from different countries and cultures navigate space,” said Dr Spiers.

“It’s a massive online citizen science experiment that will give us an idea of what is ‘normal’ through this game.

“If we tile that information together, we can get a sense of how dementia changes over a lifetime, and other demographic factors.”

Dr Spiers stressed the game was not itself a test for dementia.

“If you’re worried about your memory or any changes to your health, speak to your GP,” he said.

The researchers plan to share the first results of their data collection in November.

A video game could be used to detect the early signs of Alzheimer’s disease, experts believe.

It could also be used to track the progression of the disease and to measure the effectiveness of treatments.

Pharmaceutical giant Pfizer Inc. is working with a video game design company to test whether video games can detect cognitive differences in healthy elderly people who are at risk of dementia.

A video game, which can be played on iPads and iPhones, could be used to detect the early signs of Alzheimer’s disease. It could also used to track the progression of the disease

A video game, which can be played on iPads and iPhones, could be used to detect the early signs of Alzheimer’s disease. It could also used to track the progression of the disease

Akili Interactive Labs Inc. says this is the first time a pharmaceutical company has tested the use of video games as a clinical tool for picking up the early signs of degenerative neurological diseases.

As part of the trial, experts will evaluate 100 healthy elderly people both with and without amyloid in their brains. 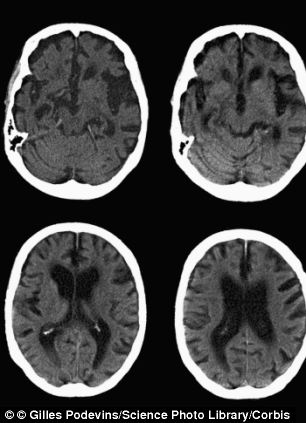 The game is designed to measure and improve the ability of patients to deal with distractions which impact their ability to pay attention, plan and make decisions. Image shows CT scans of a brain with Alzheimer’s

Amyloid is thought to be the most likely cause of the damage that underpins Alzheimer’s disease, meaning people with it are perceived to be at high risk, while those without it are at lower risk.

The volunteers’ cognitive abilities will be assessed at the start of the study and during one month of playing the game which is called Project:EVO and which runs on iPhones and iPads.

The game requires the volunteers to steer around a track while, at the same time, shooting road signs.

The researchers hope to discover whether the game could be used to help identify early Alzheimer’s.

The game is designed to measure and improve the ability of the participants to deal with distractions and interruptions which impact their ability to pay attention, plan and make decisions.

Such deficits are common symptoms of many degenerative diseases, such as Alzheimer’s, but also of conditions such as ADHD, autism and depression.

Michael Ehlers, Senior Vice President and Chief Scientific Officer of the Neuroscience Research Unit at Pfizer, said: ‘A tool that enables cognitive monitoring for the selection and assessment of clinical trial patients has the potential to be an important advance in Alzheimer’s research and beyond.’

Alzheimer’s disease is the most common form of dementia which is a general term for memory loss and loss of other intellectual abilities serious enough to interfere with daily life.

There are estimated to be about 650,000 people in England with Alzheimer’s disease, most of whom are over the age of 65.

There is currently no test to effectively diagnose Alzheimer’s disease – doctors have to make a diagnosis based on their assessment of the symptoms.